Overview of Types of Dog Worms:

Worms (helminthes) and dog worms in particular are “Internal Parasites”.  Most canine worms involve the gastrointestinal tract as their primary predilection site, although they can also  infest and impact other organs of body in heavy infestations.

Some signs of worms in dogs can be seen with the naked eye, while others such as hookworms and whip worms cannot be seen. Heart worms, which occur primarily in the heart, is called a circulatory worm. Heart worm may infest the respiratory system as well.

Most puppies are born with roundworms, no matter where the puppy was purchased. Adult dogs pick up worms from eggs that fell off feces.  These eggs can survive on the ground for months.  When a dog smells the anus of another dog, they can pick up worm eggs that are  ingested and then start to grow as they move through the intestines.  Other types of worms such as tapeworms can enter through the skin.

Types of Dog Worms Include:

Roundworms in dogs are the most common type of canine worms. These dog worms are also called “ascaridoids” or "ascarids".  Two different species, Toxocara canis and Toxocara leonis can cause “Ascariasis” in dogs. Roundworms are transmitted either by contaminated soil, dust, or by moving through the placental barrier to an unborn pup or even through mother’s milk.   Most puppies have roundworms.  Even if a mother has been demwormed, eggs that are hidden in the body from the "worming" medications can hatch and infect a puppy.

Once eggs are swallowed by a dog, they penetrate into the intestinal mucosa. Infections can occur during 2-1/3 to 3 weeks of life. When the worms hatch they become larvae and at last become capable of laying their own eggs. Eggs are then passed into the feces and the worm life cycle continues. Roundworms can cause progressive weight loss, lack of growth, a protruded belly and make the coat appear dull. Diarrhea and vomiting are more common in a severe infestation.  The worms may also grow to the point where they obstruct or block the intestine.

Symptoms of roundworms in puppies includes soft feces, or even spotting 2 to 4 inch worms in the diarrhea or vomit.  Treatment involves a deworming medication.

Ancylostoma caninum is the specie of hook worms which infect dogs. Dog Hook worms can range from 12 – 15 mm in length.  Hookworm in dogs may be transmitted through environmental contamination, milk and through skin penetration, especially in puppies. The eggs of dog hook worms can survive in the soil for months. Anemia is the main representation of hook worms in dogs since the hookworms draw blood from the body. 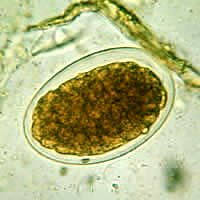 Puppies that show signs of anemia due to hook worms usually do not survive with signs starting to appear rapidly during the 2nd week of life. Diarrhea which contains dark blood is a common symptom, which contains dark blood. Other symptoms of dog hood worms include emaciation, weakness. Generalized illness is persistent in cases of chronic infestation.

Whip worms infest the cecum (large intestine) of dogs, and are long thin worms. Trichuris vulpis is the specie of whip worm which causes “Trichuriasis” in dogs. Eggs passed in the feces can survive in a warm environment and may become infective in 2 – 4 weeks time. If ingested while still alive, they move on to the cecum and cause problems for dogs.

Dog Whip worm in heavy infestations can cause dilation of the colon, weight loss and diarrhea. Diarrhea in most cases is mixed with fresh blood, which also results in anemia. Canine anemia is a decline in the red blood cells ability to carry oxygen throughout the body resulting in fatigue and other chronic problems if not treated.

Dipylidium caninum is specie of tape worms. It gets its name from its appearance which is flat, segmented and tape like. Each segment varies in length. Every segment of a tape worm can reproduce, and each possesses a digestive and excretory system of its own. These segments may look like specks of rice in the feces and can also be attached to the anus of dogs.

Tapeworms in dogs can cause restlessness, irritation at the anus, abdominal pain, varying appetite, emaciation and mild diarrhea. The coat may appear shaggy and irregular, even after regular grooming.

Dog tap worms is contracted from fleas, the so the key to prevention is to make sure a dog doesn't have them.

Spirocura lupi is a type of dog worm which occurs in the esophagus. Physaloptera on other hand is a type found in the stomach of dogs. Both of these are relatively uncommon types of dog worms and cause a slight clinical condition or symptoms. These can cause inflammation in the esophagus and stomach by causing slight hemorrhages on the walls of both organs.

Dog Heart worms are parasites which infest the circulatory system of dogs. These may be found in the right ventricle of the heart, causing heavy congestion in the circulatory system. Dirofilaria immitis is particular specie of heart worm and is considered to be the cause of heart worm disease in dogs.  Heartworms are spread to dogs via mosquitoes .

Heart worms require an intermediate, biological vector to complete its life cycle. Over 70 species of mosquitoes can act as vector for the filarial specie of canine heartworm, where some stages of development are completed in the mosquitoes gut and then transmitted to dogs in this infective form, which in turn causes congestion in the dogs heart. These may also infest respiratory tubules.

Dog heart worm symptoms include cough, intolerance to exercise, lethargy, and progressive loss of condition.  In more advanced cases  heartworm signs include blood mixed into the sputum and darkened urine which represents liver disease (Caval Disease). Canine heartworm symptoms are usually not revealed until the disease enters into an advanced stage, resulting in patient infection. Heartworms can live inside a dog for years without showing symptoms. 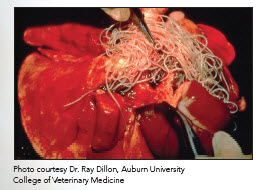 Confirmation of dog worms is usually not possible with a clinical examination alone. In most cases, common signs of dullness in the skin and coat, lethargy and progressive weight loss or anemia (loss of red blood cells) can be suspected for dog worm infestation, but cannot be confirmed clinically.

Laboratory procedures are considered to be compulsory in almost all cases as a definitive confirmation of the problem. Different procedures can be followed depending upon which system of the body is involved and which part of the worm life cycle is being treated. Dog worms which involve the gastrointestinal tract are usually diagnosed by an examination of the feces for eggs, larvae through different parasitological approaches such as feces flotation techniques and a technique called oil merged mounts.

Other dog worms, which involve the circulatory or respiratory systems, can be diagnosed by serological tests for the presence of specific antibodies, confirming a particular infestation.

Radiography is only a preferred method when detecting any kind of obstruction. It cannot confirm a dog worm infestation.

For Heart worm disease in dogs, it is highly recommended that the degree of infestation should be calculated prior to treatment. Different treatment plans can be followed depending upon the diagnosis. Heart worm adulticide i.e. Melarsomine Dihydrochloride is the only effective way to treat heart worm in dogs. The dose rate is usually variable depending upon the age and severity of the condition. 2.5mg/Kg B.W is usually preferred as a safe dose administered deep intramuscular (IM) in the lumbar musculature (back between lowest rib and pelvis). Injection is repeated after 24 hours, and dogs may experience severe pain and swelling at the injection site. Ivermectin is highly recommended as a preventive dose administered for safety and to ensure complete eradication of worms and eggs.

Prevention of Dog Worms in Puppies and Adults

Most puppies are born with worms, particularly roundworms (ascarids). Many veterinarians will recommend that pregnant dogs be treated for worms so that they do not pass them on to any puppies. The drugs fenbendazole (40th day of gestation through the 14th day of lactation),  ivermectin (provided ton day 0, 30, and 60 of gestation and 10 days post whelping - giving birth). and selamectin ( 10 and 40 days both before and after parturition (birth) are used.

In areas where worms are common puppies and their mothers are commonly treated at 2, 4, 6, and 8 weeks of age. Some experts recommend extending this treatment to 12 weeks and then treating monthly until a dog is 6 months old.  Most dogs receive a heartworm preventative that is taken 1x per month for life.

Dogs that spend a significant amount of time outdoors should be monitored with annual stool testing and continual treatment with an Antihelmintic medication. Dogs that dig in the soil are particularly at risk and any feces should be immediately cleaned.

If keeping a dog in a kennel, look for concrete floors as these are the easiest to clean. Dirt areas or runs can be a source of worm eggs which can infect a dog.

There are several preventative dog worm medicine products that can help guard against heart worm and other types of worms. These include:

Canine Heartworm medications Revoltuion and ProHeart 6 do not protect against other types of dog worms.  A good resource for prescription and non-presription discount heartworm medicine such as "wormers" is National Pet Pharmacy or VetMedicines.

There is a homeopathic natural approach to having a dog's system expel worms and other parasites.  The product, Parasite Dr. Capsules , contains herbs which are known for their ability to cleanse the digestive system and repel parasites such as canine worms.  This is not in place of conventional "wormers", but could help to prevent the need for one. This product contains:

Certain canine worms such as roundworms (ascarids) and hookworms can cause disease in humans.

Children are at greater risk than adults since they can pick up the eggs outdoors in places such as an unprotected sandbox. Problems can occur in the brain, liver and lungs and can cause tissue damage.

In terms of human roundworms, most people (adults and children) will experience no symptoms and the worms will pass harmlessly from the body.  However, in some cases, the worms can cause a condition call visceral larva migrans, which can cause nerve, tissue and eye related problems.  In chronic cases it can cause blindness.

Hookworms in humans can be contracted through the skin or via ingestion of eggs. Symptoms of hookworms in adults and children include skin lesions and diarrhea if the hookworms enter the intestines.  This condition is called  cutaneous (skin) larva migrans.

To prevent the spread of disease children should avoid unprotected sand boxes and any exposed feces should be properly cleaned up.  One worm in one dog can lay as many as 100,000 eggs.  If in the feces and the feces spreads such as when it is outdoors in the rain, an egg infestation can be troublesome.  Roundworm eggs can survive in the environment for years.

To prevent dog worms from spreading to adults or children, dogs should be properly dewormed, and hands should be washed after handling and disposing of any feces.