Lyme disease is a term that applies to several different types of bacteria transmitted by ticks. Symptoms of canine lyme disease are dependent on the type of bacteria that has been transferred by a deer tick to your dog (it is also possible to get lyme disease from a blood transfusion if the donor was infected). Humans cannot be infected by a dog or a cat. 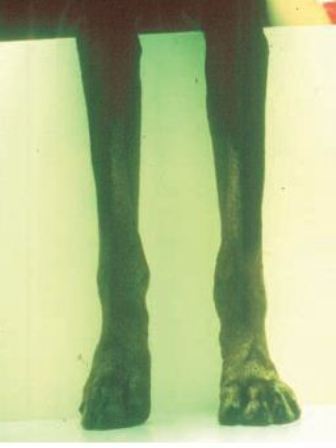 The group of bacteria that causes infection is called Ehrlchiosis. Each form of ehrlchiosis bacteria tends to infect a specific type of white blood cell or the platelets.

(Most Common Form of Lyme Disease in Dogs)

Lyme disease dog symptoms due to Ehrlichiosis Bacteria appear in 1 to 3 weeks. Symptoms can be barely noticeable for more pronounced and include:

Antibiotics are used to treat this type of lyme disease (Tetracycline, Doxycycline) for 3 weeks. If your dog has a severe case then treatment can last 1 year. If your dog has a severe case then your veterinarian may recommend a blood transfusion. Dogs with this problem are expected to make a full recovery. In some cases the prognosis is not as good if all parts of the blood are affected (low white, red and platelet counts, a condition called pancytopenia). Similar concerns exist if your dog has a heart deformity (hypoplastic) or bone marrow disease (aplastic bone marrow).

This type of lyme disease is caused by bacteria that is transmitted by ticks and is also commonly seen in both people and dogs. It is believed that for the disease to take hold, the tick would have to be feeding on your dog for 24 to 48 hours.

This type of lyme disease in dogs usually infects the areas closest to the tick bite.

Antibiotics (doxycycline) are used to successfully treat this form of the lyme disease over a 1 month period. You should see your dog start to feel better 1 day after treatment begins. It is possible for a relapse after treatment.

This type of lyme disease in dogs is caused by bacteria which infects a type of white blood cell. There are two prevalent symptom groups for this type of bacteria.

The other type of granulocytic ehrlichiosis has similar symptoms to the monocytic form of the infection described above. These canine lyme disease symptoms include:

Note that tests used to detect other forms of lyme disease may not work to detect this form.

Treatment is with antibiotics as mentioned above.

This form of lyme disease in dogs only enters into the platelets. Lyme disease dog symptoms is usually a mild fever.

This isn't a form of bacteria, but caused by an organism called a protozoa or parasite. This parasite causes puppies to get very sick, and only causes mild symptoms in adult dogs (in South Africa, varieties of Babeiosis can kill adult dogs).

This type of lyme disease in dogs can be diagnosed with a blood test (IFA). Your veterinarian will be able to see the parasites which infected your dog.

Dogs are usually not treated for this condition if symptoms are mild. If treatment is required, then the drug Imizol, Azithromycin or a type of steroid is used depending on the type of parasite your dog is suffering from. Note that these drugs like Imizol have potential side effects that could negatively impact the kidneys or liver.

Homeopathic remedies have a long history of providing the body with extra support. A product called PetAlive TF-Defense Formula is specifically made to help with the natural treatment of acute Lyme Disease or other tick borne diseases in pets. It might be worth mentioning to your veterinarian as part of the treatment process. Ingredients such as Milk Thistle, Cortalus hor and others have a long history of supporting the liver and blood cells. The company also has additional information on lyme disease in dogs that might be of help.