Cancer is an illness that refers to cells in your dog's body that are growing without any kind of control by the body. Approximately 50% of dogs over 10 years of age die from cancer. There can be cancer in any part of the body, with the common types of cancer referred to as neoplasia. A tumor or mass is a neoplasia that has swollen.

Human and canine researchers are learning from each other with canine lymphoma and brain tumor treatments  directly leading to improvements and trials in human health. 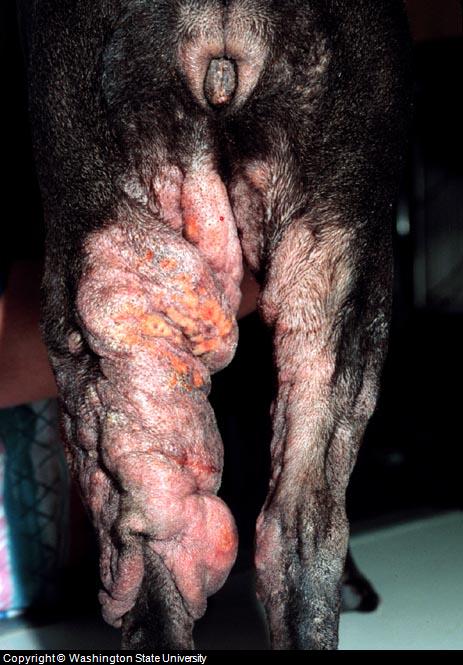 Cancer is characterized as being primary or secondary:

Cancer is also referred to as being benign or malignant.  A veterinarian will need to biopsy or take a sample of a tumor to determine its' type. 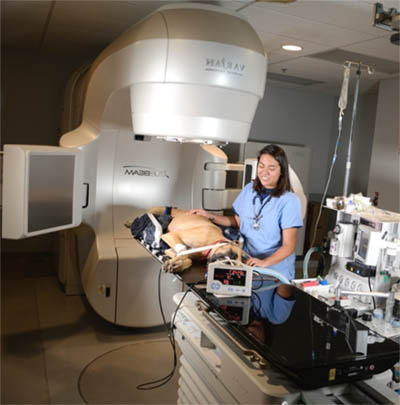 Bladder Cancer in Dogs - this type of cancer refers to a tumor or neoplasm that forms in the urinary tract.  It is often fast spreading and tends to reoccur after treatment.

Dog bone cancer - Large breed dogs are susceptible to canine bone cancer as are dogs that are 7 years of age or older. Cancer is commonly seen in the legs and joints. Symptoms include pain, swelling and lameness.

Canine breast cancer - this type of cancer accounts for 50% of tumors found in bitches.  Treatment involves surgery, chemotherapy and radiation if appropriate.  It is usually found on the 4th and 5th nipple.

Canine intestinal cancer - Intestinal cancer is rare in dogs and can occur anywhere in the small or large intestine.  The prognosis is considered poor due to the high rate of recurrence after treatment via surgery.

Dog Leukemia - Leukemia in dogs is a type of cancer that involves the blood in the bone marrow.  While not common, the leukemia in dogs is usually related to a problem with the white blood cells calls lymphoid leukemia.  There are two types, called acute, which has a short expected lifespan and chronic, which a dog could live with for months or years.  Canine leukemia symptoms include anemia, weight loss, low appetite and fever. Treatment involves the use of medications that fight cancer.  Chemotherapy is not known to help.

Canine Liver Cancer - Liver cancer in dogs can be either primary or secondary.  Secondary cancers are more common.  Surgery and chemotherapy are the primary methods of treatment.

Dog Lung Cancer - This type of cancer usually affects older vs. younger dogs, although this could be due to late diagnosis. Canine lung cancer symptoms include respiratory problems, weight loss, avoidance of food, lethargy, lameness and fever.

Lymphoma Cancer in Dog - This type of cancer is common in dogs. Symptoms include an enlarged lymph node.

Canine mast cell cancer - mast cells are from the immune system and are found in the skin and internal organs.  If the mast cells are localized to a specific area such as a dog lump on skin, then surgery can provide a cure.  More advanced conditions that metastasize deeper into dog skin tissues or that are found on an internal organ can be more difficult to treat.


Canine mouth cancer - Cancer in the mouth or dog oral cancer is a common type of cancer in dogs that is often malignant. This type of cancer should be treated quickly to avoid spreading. Symptoms include odor, trouble eating, tumors on the gums and bleeding.  Treatment options include surgery, cryosurgery (freezing tumors), radiation and chemotherapy.

Canine nose cancer - This type of cancer is found inside a dog's nose and is uncommon. Symptoms include a nose bleed, trouble breathing and swollen facial features.  Advanced cases spread to nearby lymph nodes, lungs and the brain.  Treatment can be successful if caught early.

Canine pancreatic cancer - A difficult form of cancer to diagnose without tests since symptoms are not specific. Treatment involves surgery.

Canine prostate cancer -  This type of cancer either starts in the prostate or spreads to the prostate from the urinary tract.  There is no effective treatment.

Cancer Canine Skin Skin - dog skin cancer can be benign or malignant, and primary or secondary.  Diagnosis requires a biopsy to differentiate the condition from other dog skin problems.  Treatment options include surgery, cryosurgery, radiation and chemotherapy.

Dog stomach cancer - this is a rare type of dogs that whose cause is not known.  It often spreads from other parts of the gastrointestinal tract to the stomach.

Canine testicular cancer- This is also a common form of cancer in dogs. There is a specific condition where the testicles aren't in the correct position (retained testicles) that often leads to cancer. Castration is an effective method of treatment.

Canine thyroid Cancer - Thyroid cancer in dogs takes on several forms. Treatment using surgery, radiation and chemotherapy can be successful if the cancer hasn't spread deep into the thyroid tissue.

Canine tongue cancer - this type of cancer is not common in dogs.  It is difficult to diagnose since symptoms don't appear until later stages of the disease.  If caught early, the prognosis is good.  Early signs include a reddening of the tongue following by inflammation and difficulty swallowing or eating.

When a dog is being examined for cancer, a veterinarian will attempt to determine how advanced the disease is (called staging). Obviously advanced cases have a different treatment strategy than cancer that is caught early.

Dogs with the same tumor "stage" are treated the same way.


Beyond the common tests, others are specific to certain types of cancer that help oncologists spot cancer in dogs. These tests include: 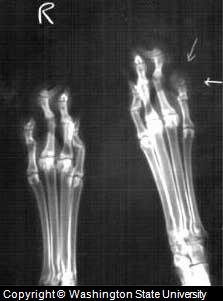 The American Veterinary Medical Association has published a list of 10 canine cancer symptoms. They are:

1. Urination, defecating, problems breathing
2. Unusual swelling that persists and continues to grow
3. Persistent lameness or stiffness
4. Sores that do not heal
5. Hesitation to exercise or loss of stamina
6. Weight loss
7. Difficulty eating or swallowing
8. Loss of appetite
9. Offensive odor
10. Bleeding or discharge from any body opening

A decision is made as to whether to treat your dog based on the expected outcome and quality of life. Advanced stages of cancer are commonly not able to be cured. If there is no cure available, then the goal is known as palliation which is to keep your dog comfortable.

Early stages of cancer can usually be treated. Approaches to dog cancer treatment include: 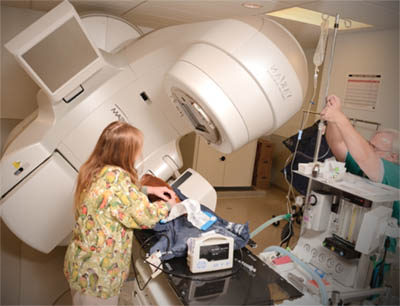 These approaches may be used individually or in combination. Like in humans, many veterinary hospitals are always conducting trials to treat rare forms of cancer. Most treatments were developed for humans that have been adapted for dogs.

In June of 2009 (for release in 2010), for the first time a treatment called Palladia, a drug that kills mast cell tumors (a lethal type of skin cancer), was released for dogs only. The drug represents a new class of treatments that are made to attack a specific type of tumor. The fact that the drug is only for dogs is significant since medications made for a specific purpose tend to have fewer side effects. The bottom line is to do your research to see what types of treatment options are being researched at the moment you need them.

A good source to check for canine cancer trials is the Veterinary Cancer Society. Hospitals that conduct trails that are worth checking include:

You can also search this clinical trials database for cancer in pet animals.

The goal of planning a canine cancer diet is to starve the cancer cells (neoplasms) of the nutrients they need to grow so that they slow down. At the same time, other parts of the body need a balanced set of nutrients to support your dog's overall health. High quality protein and fats should be in a higher proportion for dogs with cancer.

It is generally believed that simple sugars provide energy to cancer cells. These include sugar itself, ingredients that end in "ose" such as sucrose and other such as syrups and fruits. Other more complex sugars such as bread are needed, but in moderate amounts. See our guide to choosing a canine cancer diet for specific recommendations.

It is widely believed that Omega 3 Fish Oil (omega-3 fatty acids) can help dogs undergoing treatment for cancer, particularly for radiation therapy. It can help to reduce the inflammation in cells surrounding the areas being treated.

Homeopathic remedies are not a cure for cancer, however, there is a growing body of evidence that select tonics may provide added support to the immune system and provide cellular strength. It's a way of helping your dog help itself. One product that has ingredients selected specifically for immune system and cell support in dogs is C-Caps Formula.  It is ideal for support after cancer treatment during the recovery phase to strengthen a dog's body and for help removing toxins.  In can also help with a dog's quality of life if treatment options are not available.

The Decision to Treat Or Not To Treat?

Everyone loves their dog, although unfortunately cancer therapy can be expensive and take a significant amount of time. Since cancer needs to be treated according to a strict process or protocol, your dog will need to be taken to a veterinarian at specific times, which could be difficult. Follow this link for more information on dog cancers.