Seizures usually last 90 seconds or less. They are the result of sudden electrical activity in the brain. If a seizure lasts for more than five minutes or if their are a cluster of seizures with the dog remaining unconscious, call your veterinarian immediately. They appear and diminish suddenly and tend to occur again. Seizures can have no know cause, or diDsease and injury. Treatment involves addressing any underlying cause or trigger if it can be identified.

A canine seizure occurs when a dogs brain becomes suddenly disturbance that occurs suddenly and that ends as suddenly. Seizures in dogs tend to continually appear. Seizures are referred to as being focal when they are limited to one are of the body (called localized). When seizures affect the entire body it is referred to a being a generalized canine seizure. 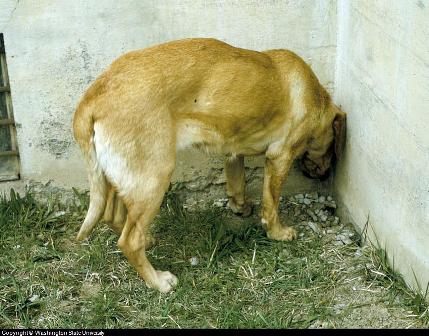 The veterinarian will need to determine the underlying cause for a dog seizure. Canine seizures can result from:

In addition to the aforementioned dog seizure causes, A female dog can experience a seizure after giving birth if calcium levels are low.

It is possible that a dog can experience seizures without a known cause. This is referred to as Idiopathic epilepsy. It tends to appear in dogs between the ages of 1 to 4 years. If seizures appear after 4 years, that this cause is ruled out. Breeds where idiopathic epilepsy appear more often include:

Dog epileptic seizures tend to increase in frequency over time.  Each seizure needs to be similar in nature in order to be considered epilepsy.

When a cause is identified for the dog epileptic seizures, it is sometimes some type of brain injury such as scar tissue.

A dog with epilepsy may not have a classic seizure, but may show other odd behaviors which is referred to as a canine psycho motor seizure. These behaviors include barking in a frenzied state, licking its body, chewing the body, staring out into space , or snapping at invisible things.

The goal of treatment for dog epileptic seizures is reduce the frequency of seizures and the severity of the canine seizures. Dogs that experience more that 2 seizures in a month or 10 to 12 in a year are treated.

In this stage, it should be remembered that patient has no control and awareness of its whereabouts and in-voluntary bodily actions. Therefore, the patient may not respond to any commands and any past training efforts.

Seizures impact the dogs whole body. Dog seizure symptoms including a dog falling on its side, paddling of the legs, urination, salivation and defecation. Seizures usually last for under 2 minutes. Other symptoms during the canine seizure include a dog stopping to breath for 10 to 30 seconds.

Just after a seizure a dog can act disoriented and confused including a lack of coordination.  It can take several hours or a few minutes for a dog to recover from a seizure.

Incontinence (involuntary defecation or urination) is a symptom that demonstrates that a dogs condition has worsened over time.

The following are some tips can help to keep you and your dog safe during a canine seizure:

The best seizure response dog is to leave the dog along during and after the seizure.

A dog's history along with other clinical and laboratory procedures is very important for reaching a diagnosis. Be sure to let the veterinarian know about all related information such as the appearance of a dog during seizure, duration of the seizure, unilateral or bilateral seizures, exposure to any toxins, chemicals etc, recent medication and vaccination, diet, pattern of seizures (like time, place, activity etc), unusual signs before and after seizures. This piece of information will help the veterinarian make an early decision about the nature of the dog seizures.

The area of the body where the seizure occurs can indicate which side of the dogs brain is causing the problem. This area of the brain which triggers is a seizure is called the focus point.

Tests used include blood tests, brain scans (X-Ray, CT, MRI), and when needed a cerebrospinal fluid test (DSF). A test of electrical activity in the brain (EEG) can also be helpful.

Once an underlying cause is determined, the goal is to treat the cause in order to remove this as a trigger for the problem. If seizures still occur then dog seizure medications are used.

Dog seizure medications are used if the seizures recur. The specific medication selected depends on the nature of the seizure including anti-convulsants, which are also used for dogs that have seizures of an unknown cause (idiopathic epilepsy). These dogs require medications for the rest of their life.

Types of dog seizure medications include:

While your dog is being diagnosed, you can use supportive alternative medicine canine seizures such as supplements and natural remedies to help provide comfort to your dog. Remember, there is no specific treatment for seizures, they can only be managed with therapeutics that act on the nervous system.

Alternative medicine canine seizures choices include the natural remedy Muscle and Joint Support which can help with liver toxicity and maintain the health of the muscular/skeletal system. In terms of Supplements, a good choice is 21st Century Pet-Eze (Level 2), which can help to keep a dog calm during periods of anxiety and stress. The only way to keep your dog comfortable is to reduce the frequency of any dog seizures, duration and severity of the seizures.

These supplements/remedies provide a dog seizures treatment natural approach. They can be used in combination with specific drugs (more likely barbiturates) prescribed by your veterinarian.
Previous Section Home Page