Lyme disease started to be widely spread in 1975 in the State of Connecticut. It is spread by ticks that attach themselves to a host and then spread the lyme bacteria. In a minority of cases the tick spreads a parasite. Both people and dogs can contract lyme tick. The disease cannot be spread between dogs and humans and can only be contracted when bitten by a deer tick. 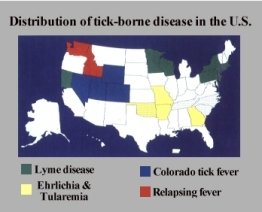 89% of the cases of lyme disease have been diagnosed in the Eastern United States, West to Chicago, Wisconsin and Mid-Atlantic states. Researchers aren't clear as to whether or not dogs that have had lyme disease can be re-infected. Ticks that are infected fall off deer and then attach themselves to your dog when she walks by.

Many dogs that live in areas with a high incidence of lyme infections, test positive for the disease, but do not show any canine lyme disease symptoms (asymptomatic). In most cases treatment is not recommended for these dogs, unless the dog is a breed that tends to be more sensitive to the disease (see below) or after testing has a high level of protein in the urine. Protein could be a sign of other problems which can be triggered by the lyme such as kidney and joint problems. It is believed this is due to what is known as an auto-immune response, where the body incorrectly attacks itself, believing it is attacking a diseased cell vs. healthy cells.

A recent Cornell University study showed that canine lyme disease symptoms in Beagle puppies that were exposed didn't appear until 2 to 5 months after they were exposed to the lyme bacteria. They showed lyme disease dog symptoms for 4 days which went away with no treatment needed.

Ticks need 24 hours on the host dog for your dog to be infected. Prompt removal of ticks will help to prevent your dog from getting the disease.

See our guide to dog tick pictures if you know what the tick that attached itself to your dog looks like. The easiest way to differentiate between ticks is by the color of the legs and the shape and color of the back. Lyme disease is transmitted by a tick with black legs, while other diseases, such as rocky mountain fever, are spread by ticks with brown legs. The lonestar tick has a distinctive white dot on the back (spread ehrlichiosis and tularemia).

The most pronounced of the canine lyme disease symptoms is lameness in the legs. It will shift from one leg to the other (in humans you see a round rash with the tick in the center, this is not the case with dogs).

Other symptoms include loss of appetite (anorexia), swelling in a leg that is near the tick bite, and lameness. In most cases symptoms are not severe.

In rare cases the canine lyme disease symptoms could be more pronounced such as joint disease and kidney disease. Breeds that have an above average incidence of problems include Shelties and Retrievers (Golden, Labrador). 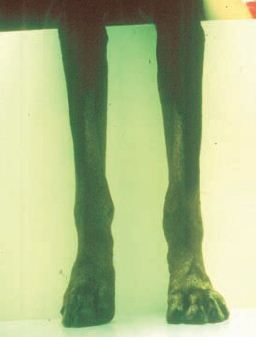 How To Diagnosis of Canine Lyme Disease:

A veterinarian will take a simple blood test (SNAP-3Dx, IDEXX) or ELISA test to determine if dog lyme disease exposure has taken place. A positive test result alone doesn't mean your dog has the illness. Other factors such as clinical symptoms such as arthritis are needed to confirm the diagnosis. If canine lyme disease is suspected, response to treatment will also contribute to making a final diagnosis.

Canine Lyme disease can be treated with a 1 month course of oral antibiotics (doxycycline). If your dog has a tick, then a topical cream is available to kill the tick before removal.

A positive test result only means that your dog has been exposed to lyme, not that he or she actually has the disease. Also, it is possible to get a positive test that is not correct (a false positive). If your veterinarian suspects that this is the case, there are other tests that can be used to confirm the diagnosis (although these can also return a false positive result).

There is also a homeopathic remedy available designed to provide added support after a tick bite. PetAlive TF-Defense Formula is made specifically for the natural treatment of acute Lyme Disease or other Tick borne diseases in Pets.

The manufacturer is a good source of information on natural approaches to restoring your dog's health.

Removing a Tick from Your Dog

To remove a tick pull the tick by the head with a pair of tweezers. Pull straight from the dog without twisting in one slow and steady motion. Do not pull from the body to avoid squeezing the tick and injecting more bacteria into your dog's body.

Be sure to clean the area of the bite and treat with an antiseptic. For more information see our guide on removing ticks from dogs.

Picture of How to Remove a Tick From a Dog

A vaccine is available to prevent lyme disease. Discuss with your veterinarian if you live in a high risk area. There are also products that help to keep ticks off your dog as described below:

See our complete guide to dog tick products and other canine tick diseases.