There are several diseases transmitted by ticks to dogs. These include:

Canine Lyme disease is caused by a bacterial infection which is passed from an infected deer tick to your dog. Ticks are parasites that feed on the blood of host mammals. They need to be attached to host dog for a minimum of 24 -48 hours for disease to be transferred. Even after exposure, it is believed that only 5% -10% of dogs will show dog Lyme disease symptoms. In areas where there are a large number of infected ticks, up to 90% of dogs could test positive for exposure.

Picture of Deer Tick - Cause of Lyme Disease
Source: CDC 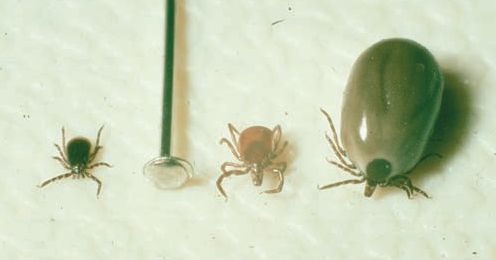 Once bitten, this canine tick disease spreads from the area of the bite through the blood stream. It can cause symptoms such as anorexia (avoidance of food), arthritis and swelling of the joints and fever. It can take as long as 4 weeks to 3 months for symptoms to appear.

There is also a homeopathic remedy available called PetAlive TF-Defense Formula. The product is made specifically for the natural treatment of canine tick disease such as acute Lyme disease or other tick borne diseases in pets. Homeopathic practitioners believe that natural products can support areas of the body associated with disease.

This is also a common form of canine tick disease. It is also a form of bacteria which is transmitted by a brown legged tick bite. The bacteria enters two types of white blood cells (monocytes and lymphocytes). It spreads through the cells to the liver, kidneys, lungs, lymph nodes and spleen.

Symptoms of monocytic ehrlichiosis includes discharge from the nose, avoidance of food (anorexia), weight loss, weakness, depression and internal bleeding. Like Lyme disease symptoms take 1 to 3 weeks to appear and could be barely noticeable or more severe.

Diagnosis of monocytic ehrlichioses requires both a positive blood test and confirmation of clinical signs. Treatment is with the antibiotics Tetracycline or doxycycline for 3 weeks. Most dogs fully recover with treatment. Severe cases may require a blood transfusion.

This form of canine tick disease is transmitted by the lone star tick (Amblyomma americanum). The tick gets its name from the distinctive white spot on its back. A second form of granulocytic ehrlichiosis can also be transmitted by the deer dick pictured above.

This type of dog tick disease also causes arthritis like symptoms such as swollen joints, acting tired, lameness in the legs and fever. Symptoms associated with the second form of this bacterial disease include anemia (low red blood cell count) and a low lymphocyte count (low count of a type of white blood cell). Other symptoms include discharge from the nose, avoidance of food (anorexia), weight loss, weakness, depression and internal bleeding (similar to monocytic ehrlichioses).

Infectious cyclic thrombocytopenia is a canine tick disease spread by ticks that infects blood platelets with bacteria. Platelets are the part of the blood that helps with clotting.

Symptoms from this type of dog tick disease are mild and appear approximately 1 to 2 weeks after infection.

This canine tick disease is not spread by bacteria, but by an organism called a protozoa. The brown dog tick is the most common way the disease is transmitted. 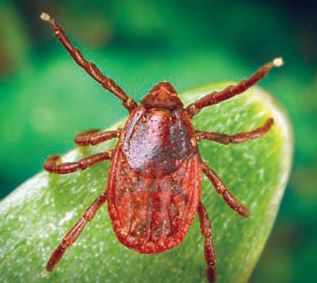 Symptoms are mild in adult dogs, but the illness can cause severe symptoms in puppies. Symptoms of canine babesiosis include tiredness, avoidance of food, vomiting, pale membranes, fever, yellowish/brownish urine and rapid heart beat.

Treatment is not necessary for mild symptoms. If symptoms are more severe the disease can be effectively treated with the drug Imidocarb dipropionate (Imizol).

This type of tick disease is primarily found in California, the Midwest and the Southeastern U.S. For some reason it is seen more often in American Staffordshire Terriers and Pit Bull Terriers.

Brown dog ticks are through to spread the disease and when one dog bites another. Symptoms usually appear in 7 to 21 days. Symptoms include fever, tiredness and pale membranes. The condition is treated with azithromycin for 10 days.

Signs of rocky mountain spotted fever in dogs usually start to appear in 2 to 14 days. The disease only appears in the early fall and spring. Affected dogs are usually under 3 years of age.

Breeds that have a higher incidence of disease include German Shepherds and English Springer spaniels (if your dog has a phosphofructokinase deficiency).

In up to 1/3 of cases you may notice some type of neurological issue such as head tremors, an altered mental state, muscle coordination issues, ear problems or limb paralysis or muscle weakness.

Treatment is with antibiotics (minocycline or doxycycline). If caught early, antibiotics work well. Experimentation is underway with the effect of corticosteroids. After recovery most dogs tend to be protected from re infection.

It is recommended that dogs be protected from ticks year round. Products are very effective and will help your dog avoid the symptoms associated with dog Lyme disease and other conditions. Do not give tick products marked for dogs to cats.

Most dogs will be protected with one of the methods listed below. If you live in a tick infestation area then consider using a topical such as Frontline and a collar such as the Preventic.