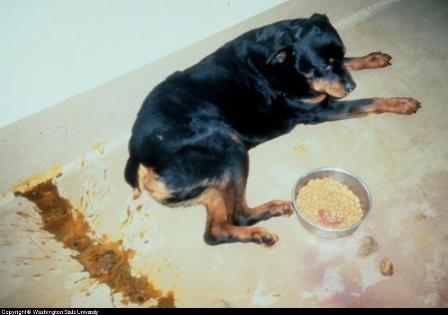 Dog Giardia Symptoms includes acute, intermittent or chronic diarrhea
Source: Washington State University
Giardia is ingested in the forms of cysts, which are freely excreted in the environment by affected dogs. The active form of protozoa, called Trophozoites is released in the small or large intestine, which attaches to the thin lining of the intestine. They not only absorb nutrients but also cover the intestinal lining, thus preventing absorption of nutrients through the intestinal wall.

Therefore, in a few days a dog with a heavy infestation of giardia is left with diarrhea, occasional vomiting and weight loss. It should be remembered that these symptoms are only exhibited in true canine giardia disease; mild infection may never cause any symptoms at all.

A major symptom related to giardia infection in dogs is dog diarrhea. Particularly, this form of diarrhea is also called canine steatorrhea, which means that it contains excess fats. The thin lining of the intestine is badly damaged by infection; therefore diarrhea contains mucus and fats.

In mild to severe giardial infections, feces appear to be deformed, highly bad odorous, pale, contains mucus and appears fatty. Watery diarrhea is not noticed in uncomplicated cases of giardia in dogs, and young dogs/puppies are more prone to severe giardia symptoms.

The intestinal lining is damaged badly, but blood is never passed in the feces. Nutrients are not properly absorbed through the intestine, therefore an affected dog may lose weight with time, but loss of appetite is unusual. Overall physiology of body may be affected and acute weakness is felt during true disease.

Clinically, a dog with mild chronic canine giardia infection appears to be normal, except that of soft, odorous and pale feces. In such cases, clinical laboratory procedures indicate that the dog is normal. Microscopic lesions over the intestine with atrophy (a wasting away) on villi are noticed. Additionally, laboratory studies at a clinic can reveal severe malabsorption of nutrients, reduced intestinal carbohydrates and heavy infiltration of lymphocytes in the digestive tract; which represents a canine giardial or any possible protozoal infestation.

Clinical dog giardia symptoms of acute, intermittent or chronic diarrhea that contains excessive fats should be suspected for giardia, but confirmation can only be made through repeated fecal flotation testing, in which giardia cysts can be observed in the saline smear of diarrhea/feces. Cysts are usually not released with every excretion; therefore repeated testing 3x a day for at least 3 – 5 days is required for confirmation.

Giardia in dogs should be differentiated from other causes of nutrient malabsorption; like those caused by exocrine pancreatic insufficiency, malabsorption syndromes and any other protozoal or bacterial infections.

Unfortunately, there is no approved treatment for dog giardia, because more research is needed about the life cycle of the protozoa and mode of infection, caused by giardia. Several anti-parasitic drugs like Fenbendazole, a combination of Praziquantal, Pyrantel Pamoate and Febantel can effectively treat giardia symptoms without any prominent side effects.

Additional measures  such as the administration of supportive homeopathic remedies which enhances the physiology of the digestive system can be of help. These includes natural remedies which promote the absorption of nutrients (Digestive Support ) , reduces protozoal infestation ( Parasite Dr.) and supports firm stool formation (Natural Moves for Pets). All can effectively treat the giardia symptoms. These remedies are for support only and should be administered along with specific anti-parasitic drugs prescribed by a veterinarian.