It’s not something that most dog owners think about, but just like any other body part, a dog penis is susceptible to certain conditions that threaten the health of the dog, and it is beneficial for owners of male dogs to understand normal dog anatomy and to be able to recognize when a problem is present. 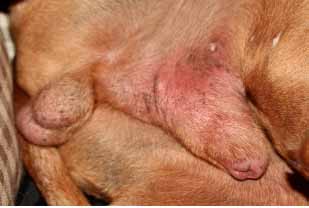 The normal canine penis consists of the outer covering, which is called the prepuce, and the glans penis, which is pink or reddish in color and is normally covered by the prepuce unless the dog has an erection. At the base of the glans penis is a structure called the bulbis glandis, which is a round structure that can become engorged and is often a concern for owners who aren’t familiar with normal male anatomy. Many male dogs, especially ones who aren’t neutered, will have a certain amount of thick, white discharge from the prepuce, which is called smegma. Although it is not a particularly desirable finding, smegma is usually a normal occurrence unless it is excessive or combined with certain abnormal findings.

Once a dog owner is familiar with normal canine penis anatomy, it is fairly easy to ascertain when there is a medical problem in that area. There are two conditions which can cause the glans penis to remain outside of the prepuce for an abnormally long time – priapism and paraphimosis.

Both priapism and paraphimosis are serious conditions, and both can lead to tissue necrosis of the penis. Emergency treatment of both conditions includes irrigation of the penis with saline solution and epinephrine or dextrose which can help draw fluid out of the tissue and make it easier to replace into the prepuce.

If and when the glans penis is replaced within the prepuce, it may be necessary for the end of the prepuce to be temporarily sutured closed so that the penis does not come back out. In some cases, replacement of the penis within the prepuce may not be possible and further surgical intervention, such as amputation, may be required.

Penile cancer is another possible problem with the penis which, while uncommon, is very serious in nature. The most common type of penile cancer is the transmissible venereal tumor, or TVT. This type of cancer originates from a virus that is sexually transmitted between dogs. It causes tumors of the external genitalia which are fairly easy to identify. The penile tumors caused by TVT are typically raised, irregular masses extending from the tip of the glans penis. A biopsy is necessary to differentiate TVT from other types of penile cancer.

If you suspect that there may be a problem with your dog’s penis, talk to your vet as soon as possible. Don’t be embarrassed if you are unsure of normal anatomy – the vet is accustomed to many questions of that nature. Another point to remember is that all of the above penile conditions are much more common in un-neutered males, so by getting your dog neutered you are likely saving him and yourself from having to deal with any of these problems in the future.