Individual dogs vary greatly regarding distemper signs. Some dogs will show no symptoms while others with weak immune systems will have more pronounced signs. Fever starts within 3 to 6 days after infection and tends to get more pronounced the 7th day after infection. Symptoms include nasal discharge, ocular (eye) discharge, depression and an avoidance of food (anorexia). If tested, the lymphocytes (lymphopenia) in the blood would be at below normal levels. Symptoms that affect the digestive system tend to be less severe. 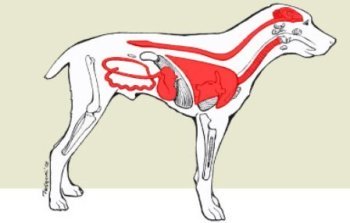 Dogs can also suffer from a condition called Hyperkeratosis of the foot pads (hard pad disease) and the nose, which is a thickening of the skin in those areas.

In some cases, puppy distemper symptoms can include problems with the teeth.

Dog distemper moves through two phases. The first noticeable symptoms is usually fever which may persist for 3 – 6 days. Fever may go unnoticed, with a slight loss of appetite and a mild inflammation in the eyes.

The second phase of distemper in dogs is usually more pronounced and involves many parts of the body over a 3 day period. A progressive fever (103 – 106 Degrees Fahrenheit) is seen, which persists for more then a week. Serous nasal discharge, ocular discharge with mucous and severe loss of appetite (anorexia) are other noticeable symptoms. Dogs will feel lethargic, unwilling to respond and usually do not eat or drink. Other symptoms include diarrhea, conjunctivitis (red eye), difficulty breathing and vomiting.

If there is a secondary bacterial infection, neurological symptoms are see such as a those described above for neurological disorders (trouble with muscle coordination, paralysis, lethargy). Dogs will not move, and become sensitive to touching, light and noise. Mental abilities may cause changes in the usual behavior such as a slight increase in aggressive behavior before death or shock sets in.

Along with systemic treatment of canine distemper, treating the symptoms is highly recommended. Fever will be treated with anti-fever medications (called anti-pyretic medications). Drugs used include NSAIDS, Paracetamol and salicyclic acids. Cooling of the body as a way of fighting fever is not recommended for treating distemper in dogs.

Neurological problems that are severe are difficult to treat, with less severe symptoms treated with immuno suppressants, anti inflammatory drugs and glucocorticoids.

Anti-biotics are used to treat any secondary bacterial infections.