There are three basic forms of a dog with diarrhea; Hyper secretions, increased permeability and osmotic mechanisms . The form of diarrhea is helpful in determining the underlying cause. 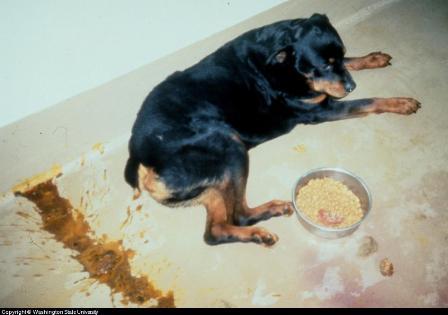 Hyper secretion on other hand is a disorder of the absorption mechanism of the intestine. In this condition, fluids do not get absorbed into the blood vessels, thus leaving the dog with diarrhea. Canine Giardiasis is one such example, where the intestine never absorbs any material.

Osmosis refers to an electrolyte defect. Maldigestion of electrolytes causes osmotic pressure in the gut lumen (cavity) of the dog, causing the retention of fluids in the intestine and eventually leads to canine diarrhea. Metabolic disorders, and dog food poisoning are examples of this form of diarrhea.

When their is a dog with diarrhea, one of the several underlying causes needs to be determined. Causes range from simple slight changes in diet to a severe infestation of parasites, infection or any form of poisoning. The following is an overview,

Clinical manifestations of a dog with diarrhea are usually enough for making a diagnosis such as the diarrhea itself, and if the diarrhea contains blood, mucus or any digestible material. Rectal examinations and the identification of any cause or mechanism, helps in determining cause of the diarrhea. Multiple symptoms such as dog vomiting and diarrhea also could indicate a condition with an increased level of severity.

Understanding a dog's history is one of the most important factors; an owner must know the habits of its dog and the history of food intakes.

Laboratory procedures as stool flotation, culturing microbes of the stool and sometimes a test called an endoscopy (visual examination) helps in confirming the exact cause of diarrhea. Chronic diarrhea or recurring diarrhea may be due to any tumor in the intestine, like adenocarcinomas or adinosarcomas, therefore a biopsy should be carried out (test of a tissue sample), if other tests such as stool flotation appears negative.

A dog with diarrhea must be treated and handled with care. Most of the causative agents result in an acute form of diarrhea, which result in dehydration. Fluid therapy via either IV (intravenous - in a vein) or SC (subcutaneous - just under the skin) are used. Normal saline containing 2 – 5% dextrose is usually effective, until rehydration is achieved. The oral administration of fluids may not work, such as when the diarrhea fluid does not stay in the intestine for enough time allowing it to get absorbed.

Once the cause of the dog with diarrhea is identified, one of the following approaches for dog diarrhea treatment will be used:

For diarrhea due to a change in food an immediate response is needed. The intake of food should be stopped at once for up to 24 hours, then reintroduced until a normal diet is achieved.  The first foods introduced for a dog diarrhea diet  usually consist of 1 protein and 1 gluten free carbohydrate such as chicken and rice or sweet potato..  Initially serve 2/3 portion rice to 1/3 chicken.  After a day or two add a chopped hard boiled egg or cooked liver.  Once the diarrhea subsides return to a normal diet.

Diarrhea due to worms should be treated with antihelmitics (expels worms). Mebendazole, fenbendazole, albendazole and febantel are considered effective for round worms when used for 3 days. Repeated therapy after a week or so is required to eliminate eggs as well. A combination of Oxantel and Pyrantel pamoate is most on worms found in the intestine, repeated dose of 10 – 15 ml a week apart are considered effective, until there is a complete recovery.

Bacterial diarrhea must be treated with a suitable antibiotic, depending upon the prescription and sensitivity of the dog being treated. Sulpha Drugs are considered to be the most effective. Dogs with diarrhea due to any poison or toxin must be treated with a suitable antidote, depending upon the toxin ingested. Universal antidotes are preferred as an immediate response followed by the use of a specific antidote.

If a dog has a sensitive stomach, or could benefit from added digestive support, a homeopathic remedy such as RunniPoo Relief.   Herbal and homeopathic ingredients such as Plantain, Lady's Mantle, Podophyllum and natural ingredients like sulhur all can help to firm up stools and restore healthy bowel functioning.

There are also some over the counter medications such as pepto-bismol that can act as effective dog diarrhea cures.  Check with your veterinarian for the correct dosage before using Pepto bisol for dog diarrhea, or alternatives such as Immodium or Kaopectate.

Ask Our Vet A Question

Have a Dog Diarrhea Related Question or Helpful Story?

What Other Visitors Have Said

Causes of Puppy Diarrhea Not rated yet
Reader Question: Treatment for Puppy with Diarrhea and Roundworms Hi Andrea, I have a Maltese/bichon cross pup, Matilda, who is 14 weeks old. …

Runny Mucus Diarrhea Not rated yet
Reader Question: How Can I Treat My Dog's Diarrhea? Our puppy 11 week old puppy is having a diarrhea problem. Her stools where fine and was wormed …