The stifle joint is a complex joint of the hind limbs in canines and other quadruped mammals. It consists of “femorotibial articulation”, “Femoropatellar articulation” and attachments. The joint is enclosed in cartilage like a capsule, which has several layers of hard and soft tissues containing “synovial fluids” in it, which acts as a shock absorber. 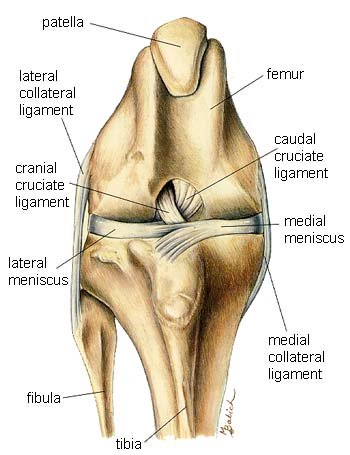 Picture of Canine Stifle Joint (Canine Knee Picture or Dog Knee Picture)
Reprinted with permission by the copyright owner,  Hill's Pet Nutrition, from the Atlas of Veterinary Clinical Anatomy. These illustrations should not be downloaded, printed or copied except for personal, non-commercial use.

“Sesamoid bones” help in the smooth and maximum articulation of the joint. The number of these bones may vary from 2 – 4 depending on the breed. The patella is an example of such sesamoid bone, which is also called the “Knee cap”.