" Heartworm signs (Dirofilara immitis ) are consistent with worms infecting both the heart and the lungs. Clinical signs or symptoms are not visible during the early stages of the disease and only start as the size of the infestation begins to grow in the heart.  The most damage is done to the lungs, only damaging the heart during the later stages of disease. Dog Heartworm symptoms usually starts with a soft cough. Other symptoms of canine Heartworm  includes fatigue, reluctance to engage in physical activity, weight loss and loss of desire to eat.  As the disease develops the cough can worsen, including the production of blood. Signs associated with advanced stages of the disease include vomiting, gagging and respiratory problems such as rapid breathing. If left untreated, dog Heartworm disease can cauase death. All dogs must be tested for Heartworm disease before treatment begins."

Heartworm signs occur well after a dog has contracted the disease.  It is spread from dog to dog by mosquitoes who spread the larvae of the worms when feeding on a dog's blood.  Because of the way it is transmitted, it is a problem during mosquito season. 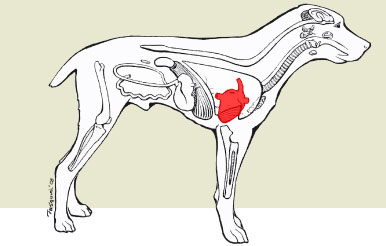 Heartworm signs include an initial soft cough followed by symptoms such as weakness, weigth loss and problems with activity.  As the canine Heartworm disease progresses, symptoms include appetite loss and even collapse.
Source: Cornell University , College of Veterinary Medicine, Baker Insitute


Treating canine Heartworm disease is possible and effective, although it can be dangerous since the treatment kills worms that are present in the heart and potentially the lungs. It is not uncommon to find 30 worms inside a dog.  For this reason, veterinarians recommend 1x month medications to prevent the problem in areas where mosquitoes reside, or at minimum during peak seasons.

Initially, dogs that have heartworms do not show any sign of disease.  When they do show signs it is difficult to differentiate these signs vs. other common canine diseases.

Canine Heartworm symptoms start to appear when a dog becomes heavily infected. A syndrome called vena cava occurs when the heartworms enter the heart and enter into the part of the heart called the vena cava.

Heartworm signs in later stages of the infection: 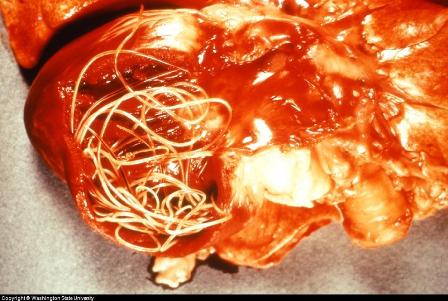 Heartworm Signs Heartworms in the ventricle of the heart of a dog
Source: Washington State University/From the collection of Dr. Richard Wescott.


The only way to be certain that a dog has Heartworms is to do a blood test which measures antigen levels (ELISA is a common type of test).  Tests can't detect Heartworms until 6 - 7 months after infection.   If tests are conducted to early, a false reading may be obtained, meaning the test says a dog doesn't have a Heartworm problem, when it actually does. A Knott's test is used to isolate any of the Heartworm larvae.

Dogs are tested before Heartworm medications are refilled to ensure that they are Heartworm free.  Even when dogs receive Heartworm treatments, any missed doses could result in a problem, particularly if a dog doesn't swallow a tablet. If Heartworm develops and a dog is given a preventative, it could be a problem since worms in the body will die potentially causing problems.   The growth stage of the Heartworm also will dictate the type of medication needed.

To determine the severity of the Heartworm signs and condition, x-rays are used. Echocardiography, another test of heart function, can also be used.

Treatment for canine Heartworm is effective, even during advanced stages of the disease.  A medication called an adulticide ( Milarsomine dihydrochloride) is used to kill the heartworms. It is administered via injection deep into a muscle.  Most veterinarians prefer to keep a dog in the veterinary hospital during the treatment period.  Once home, dogs need restricted exercise for 4 to 6 weeks as the dog Heartworm signs subside.

If the heartworms signs are severe such as the sudden onset of lethargy or weakness, due worms that are blocking the flow of blood, the surgery is needed.  This condition is called caval syndrome.  The surgery is performed with local anesthesia with Heartworm signs subsiding in 12 to 24 hours.


Heartworm signs and infection are completely avoidable by providing   a 1x a month treatment.  Products available are safe and widely used.  These include Heartgard Plus, Interceptor,  and Sentinel.  Each is administered orally and come in a chewable form.  Revolution comes in the form of a topical which is applied to the small of the a dog's back 1x a month.


In the case of Heartgard, Interceptor and Revolution, they each help to prevent infections caused by other worms such as roundworms and hookworms.  Sentinel helps to prevent fleas.  Active ingredients in these products are Ivermectin, milbemycin oxime and moxidectin.

Another product, Proheart 6, is given by injection every 6 months.  This product only protects against Heartworm.

During the time of year when mosquitoes are not biting such as winter, a veterinarian may not recommend the use of a preventative with the highest risk months being May - October in Northern states.  Darkened areas of the map below indicates the severity of Heartworms in the United States: 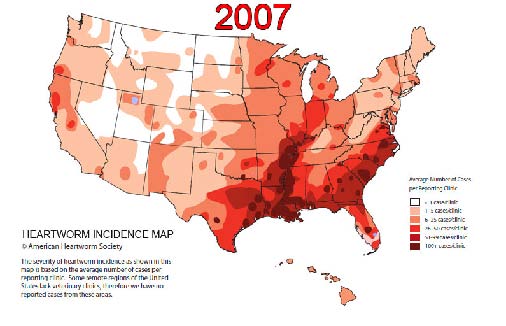 A homeopathic or natural product called Parasite Dr. Capsules , is also available.  While not a preventative, it contains natural ingredients that provided added support for helping to expel parasites such as worms.

Have a Canine Heartworm Related Question or Helpful Story?

From HeartWorm Signs to More Information on Dog Heart Worms

To More Information on Dog Worms