" Canine heartworm symptoms are related to three different stages of infection. Initial symptoms are mild and include cough, fever, intolerance and weight loss. After initial symptoms appear, they remain idiopathic, which means the cause of the symptoms remain unclear until the worms develop into an adult. At this point severe clinical symptoms start to appear such as cough, lethargy, intolerance to activities, tiredness, fever, difficulty breathing, progressive weight loss, jaundice and collapse, which is usually followed by death are some common dog heartworm symptoms. When making a diagnosis, symptoms can be helpful in helping a veterinarian suspect that there is a heartworm problem. It can never confirm the presence of the disease. Therefore as soon mild initial symptoms appear, it is recommended that screening for heartworm should be carried out. Along with systemic treatment, canine heartworm symptoms should be treated individually, according to their severity. Supportive drugs and some herbal and homeopathic remedies can help in this regard. ."

Canine heartworm has mainly three different stages of pathogenesis, in which clinical symptoms and the development of the disease is correlated. Initially, symptoms in infected mosquito bitten dogs appear as a mild cough. Cough usually persists for only one week or so, and it goes unnoticed by most dog owners, as other signs such as fever, lethargy, intolerance and progressive weight loss are usually not recorded or are too mild to notice. Symptoms other then cough are usually not noticed in those dogs which have received preventive doses of de-wormers.

The 2nd stage of canine heartworm is usually idiopathic (no known cause), and affected dogs usually do not reveal any signs or symptoms during this stage. This stage persists for 4 – 6 months in dogs. Though lethargy, intolerance to exercise, and weight loss gradually increases as the worm burden increases, any changes are often not noticed, due to the restricted activity of heartworms in the body.

If the presence of dog heartworms are confirmed at this stage, complete elimination of the problem and treatment is possible.

In latter stages, when clinical severe heartworm symptoms are exhibited, the condition is considered relatively incurable in most cases. Severe cough, lethargy, intolerance (even to walk), difficulty breathing, progressive weight loss and involvement of other organs as the liver and lungs makes the condition worsen. Cardiac arrest and extreme loss of condition causes a clinical emergency as affected dogs collapse and death occurs in just a few hours.

In latter stages, along with other general signs that are specific to canine heartworm, some other vital organs and systems are also affected. The liver and lungs are two of the most affected organs in the body. Dogs may show symptoms of jaundice, and abdominal pain due to the involvement of the liver through the hepatic portal vein, while the pulmonary artery and vein causes congestion in the lungs, resulting in a repeated session of severe cough and epithelial (outer layer of the respiratory system) injuries. 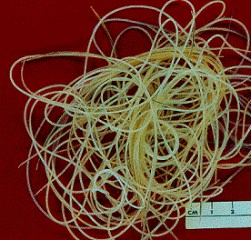 There are two blood tests used to detect heartworm in dogs.

In dogs, systemic treatment should be initiated as soon as either canine heartworm symptoms are revealed or are screened. Along with systemic treatment, it is recommended that symptoms be treated individually. Dogs must be given specific drugs for different symptoms, such as anti pyretic drugs (for fever), cough expectorants, mineral and vitamin supplements such as B complex etc. Corticosteroids can help in the management of canine heartworm symptoms as these maintain the physiology of organs and helps to strengthening muscular activity.

There are some herbal and homeopathic preparations called “Tonics”, which can help to maintain the health of affected dogs and strengthen the cardiac muscles and blood vessels such as the PetAlive Heart & Circulation Tonic . This is not a treatment for the heartworm itself.

From Canine Heartworm Symptoms to More Information on Dog Worms