" Puppy Mange is a form of canine demodicosis, is caused by a species of Demodex mites. It can be localized in one area of the body or a generalized condition with signs of mange all over the dog. It is characterized by patches of hair loss, hyper pigmentation and increased blood supply to affected parts of the skin. Itching or pruritus is either weak or absent. The generalized form of mange in puppies is identified by a severe and diffused mite infestation. Diagnosis is made through clinical examination, observing skin scrapings under a microscope and a differential test for ring worm in dogs. Treatment is based upon the form of mange causing the problem; the localized form resolves spontaneously and does not require much attention, but possibly generalized or diffused forms should be treated by using anti parasitic shampoos, solutions and support with natural remedies. ."


Cause of Puppy Mange:

Mange in puppies or canine demodicosis is caused by mites which belongs to the genus Demodex. Demodex canis is the organism which causes mange in young dogs. 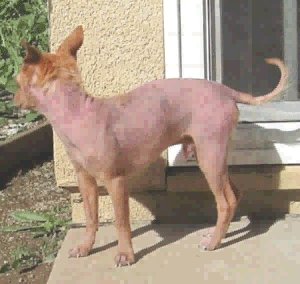 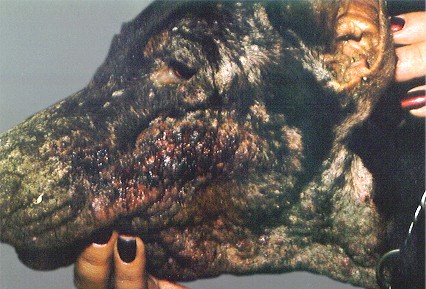 These mites complete their life cycle on a single host, thus  mange in puppies is considered to be a non contagious condition. However, mange can be transmitted from dam (pregnant mother) to puppy, and can cause an infestation even 72 hours after birth.

Mange has two clinical forms, localized and generalized. The localized form of mange in puppies is also called nummular localized demodicosis. It is considered to be a mild form of the condition and it resolves spontaneously. It is characterized by patches of hair loss and weak or no pruritus (dog skin itch). The blood supply in bald areas is increased and hyperpigmentation is noted.

In the other form of mange, the mange gets diffused across the skin and becomes generalized, ending up with severe symptoms such as distributed hair loss, and the development of skin lesions. Other problems include secondary bacterial infections, pyoderma (puss containing skin infection) and generalized complicated dermatitis (dog skin inflammation) is noted. Generalized signs of illness such as fever, lethargy, weakness, progressive loss of condition, anorexia (appetite loss) and stress are exhibited.

Unlike other kinds of mange in dogs, mangein puppies or demodicosis is relatively unique. Mild forms of the condition are not characterized by signs that are typically associated with a parasitic infestation. The absence of pruritus (itch) and being a non contagious parasitic problem are somewhat confusing properties of this condition.

Initially, a puppy's clinical history, age and veterinary examination may help in suspecting a condition as puppy mange. However, it is always better to confirm the presence of a dog mange problem through laboratory tests. Skin scrapings should be examined under a microscope for the presence of a heavy population of mites. Moreover, if needed, the condition should be differentiated from dog ring worm and endocrinal disorders through the use of detailed laboratory procedures.

Mild or localized forms of  mange are usually not treated as it resolves by itself with no treatment. However,supportive measures such as using natural remedies can hasten a dogs recovery and maintains skin health in puppies.

Generalized forms on the other hand need attention and should be treated specifically. Treatment depends upon the status of the condition, i.e. whether the condition is distributed to most parts of the body, occurrence of secondary bacterial infection, pyoderma (puss containing skin infection) and any other generalized complication.

It is treated by cleansing the lesions regularly and by bathing the puppy being treated with a medicated anti parasitic shampoos containing benzoyl peroxide. Full body dips in anti parasitic solutions for two weeks is enough for eliminating causative mites and to keep them to a limited normal population over the body. A 0.1% Amitraz dip, that is available from your veterinarian, is the approved treatment for puppy mange. It is used for two weeks.

Other drugs used for this purpose are ivermectin and moxidectin. These are effective but non licensed drugs for treating puppy mange.

Mange in adult dogs is often treated with an over the counter  lime sulfur dip, however it is not an approved treatment for puppies and can be corrosive to puppy skin.  Even diluted it is generally not used, unless under the advice of a veterinarian.

For mild puppy mange and to support each specific treatment, natural remedies can help. Different herbal preparations are available commercially, to not only help to reduce the severity of any symptoms, but also to strengthen skin health with a product such as Skin and Coat Tonic.

Have A Mange Related Question or Helpful Story?

Other Visitor Questions and Suggestions on Dog Mange

Can Adult Mange Spread to Puppies? Not rated yet
I currently had a litter of puppies and the puppies are now 10 weeks old, but the mother is now having mange like symptoms. I am trying to keep her confined …